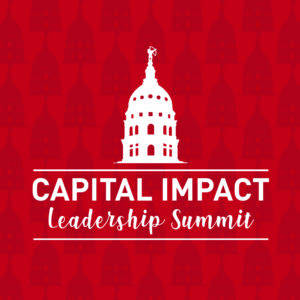 Inaugural Capital Impact Leadership Summit for Teens will be on February 12th.

Download Capital Impact Leadership Summit Info Sheet
For more information on how you can support this event please contact Lisa Dinkel at – impactsummit@jltopeka.org

Mayor Michelle De La Isla: Born of humble beginnings in New York, she faced many challenges at a young age. Early in life, her mom fled for safety with her and her brother to Puerto Rico to live with her grandparents. By age 17, she was homeless, and at 19, pregnant. Rather than feel sorry for herself, Michelle made a conscious decision to overcome her circumstances and finish her degree. She moved to Kansas in 2000 and graduated from Wichita State University with a bachelor of science degree in biology, after eight years of trying. That summer, she worked as a teacher for Upward Bound and unfortunately discovered that others faced challenges similar to hers, igniting a fire for advocacy and service that to this day cannot be extinguished. She relocated to Topeka and soon after became a single mom of three children. In 2005, Michelle joined MANA National and traveled around the country educating women on financial literacy. She was also one of the founding members of the local Hermanitas chapter for mentorship of Latina girls. As her community involvement developed, she participated in the Capital District Group to advocate and develop the current Downtown Topeka plan. In 2010, she became Executive Director of Topeka Habitat for Humanity where she established the first office, the ReStore and exponentially increased service delivery. She works alongside Dr. Morse to deliver an annual girls empowerment conference at Washburn University where more than 170 Topeka girls attend. Michelle supports the Rescue Mission as a volunteer and serves on the board of MANA National. In 2013, Michelle was elected to City Council and served as Deputy Mayor in 2016. She is the Diversity and Inclusion Representative at Westar Energy and the Mayor of Topeka. Michelle’s greatest honor is being called Erick, Cristina, and Lorraine’s mom.

Annie Diederich is the principal at Seaman Middle School and also serves as a member of the Shawnee County Suicide Prevention Coalition. After losing her husband to suicide in 2015, Annie has become an advocate for suicide awareness and prevention. Annie has two adult children, Mallory and Mason. Summary: There are many myths around the topic of suicide and this presentation will address those myths, as well as provide warning signs and actions that need to be taken. This session will help people understand that you do not have to be a therapist to be the bridge to getting help for someone who has thoughts of suicide.

Lindsay Lebahn moved to Topeka 3 ½ years ago from Nashville, TN after meeting her husband at an airport in Hawaii. Lindsay has six years of event planning experience under her belt; everything from helping plan Guinness’s World’s Largest Award Show to corporate meetings and everything in between. In her current role at Bajillion, she helps clients find and tell their truth through an enthusiastic and infectious approach. In college the native Texan represented the smallest state as a leader on the University of Rhode Island women’s volleyball team. Now, she can be found on a sideline coaching for the Topeka Saints.

Chad Parks has been the head wrestling coach at Shawnee Heights High School in Topeka, KS since 2005. During his tenure with the Thunderbirds, he has been named the 2018-2019 League Coach of the Year, 2017-18 Class 5A State Wrestling Coach of the Year, the Class 5A Regional Wrestling Coach of the Year (five times) and the Topeka City Coach of the Year (three times). Coach Parks has coached 164 state qualifiers, 15 state finalists, eight state champions and 42 state placers. In addition, his teams have earned a dual record of 160-64 and have averaged an over 80% win by pin rate for over a decade. A standout wrestler himself, Chad earned recognition as a college All-American and was a three-time Academic All-American while wrestling at Missouri Valley College, Labette College, and Fort Hays State University. In addition to coaching, Chad has served as a wrestling clinician throughout the Midwest, completed several professional speaking engagements, serves as a minister, and is the author of the recently published Amazon #1 Best Seller, “Game Changing Moves: Life Lessons From the Locker Room and Beyond.” Chad and his wife Laurie, a state championship-winning softball coach, have four children- Kate, Ally, Luke, and Jake.

By continuing to use the site, you agree to the use of cookies. more information